We’ve approached the spring season with warmer weather and where plants and animals are waking from their winter naps! Are you too coming out of hibernation? Did you spend the winter months hunkering down, eating delicious and hearty meals, and resting? If you’re slowly thawing out and looking for summer activities for your kids, you don’t need to search “tree top adventures near me,” because you’re here and you’re ready for a TreeRunner aerial adventure!

We did promise a blog on living out your Ewok dreams at TreeRunner Adventure Park, so let’s get to why you’re really here!

If you’re a Stars Wars fan — and even if you’re not — you can’t deny how cute and robust the tiny roamers of the trees are. But, do you know the fascinating Ewok history?

Ewoks are treetop dwellers on the isolated moon of Endor. By the time the Galactic Civil War occured, the Ewoks raised a nation of engaged and thoughtful, yet sturdy and strong creatures ready to battle Yuzzums or forage for berries at a moment’s notice.

The Ewoks gathered and lived their daily lives among the trees in villages built between the trees, and believed they were descendants of the “Great Tree,” a cherished tree in the forest on the moon of Endor. The beautiful and wise conifers they traipsed were fire resistant and acted as a natural repellent — protecting them from enemies and bugs alike!

The Ewoks were fierce as they gentle and lived their lives to defend and aid the Rebel Alliance and protect their homeland of Endor.

How to Live Out Your Ewok Dreams at TreeRunner Raleigh

Now that we understand the great sentient beings and landscape of Endor, you know they sailed the trees, just you do at TreeRunner! At TreeRunner, you’ll climb, swing, and soar just as the Ewoks did in their treetop haven. Enjoy a day at the aerial park for a summer activity with your kids or escape the cubicle life for a team building experience.

Are You Ready For the Ultimate Ewok Treetop Experience? 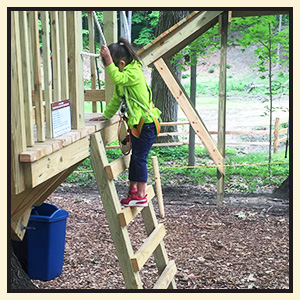 Whether you’re bringing a youngster or you’re just young at heart, below are a couple of Ewoks games you can play at the park.

Embody the Spirit of the Ewok

Not only did Ewoks invoke a spirit of fearlessness and action, they balanced it with a character of curiosity and resiliency. They were also deeply committed to the civic duty of their tribe and after the destruction of the Empire, they offered a rebel commando named Dade a “therapy droid” to help treat his PTSD. Later, some Ewoks even volunteer to leave Endor and help the veterans recover.

These beings truly embrace the David and Goliath life — they are small and usual outnumbered but find success by taking their strengths and figuring out new and innovative ways to outsmart their opponents!

TreeRunner is an Ewok Sanctuary!

In today’s post we’ve explored what the Ewok culture was like and how to live out your Ewok dreams by playing games at the treetop park such as the Yuzzum game and the Singing game. No matter who you are — young or old — the Ewoks can teach you about curiosity and adaptability!

To live like an Ewok and surf the treetops, book a treetop adventure today!